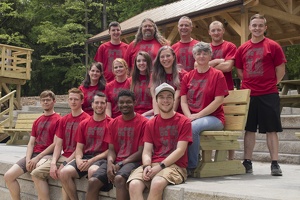 Well… We survived another summer camp season. Which is fitting seeing as our theme this year was survival. How do we survive as followers of Christ in a world that opposes everything that we believe? How do we fight against an enemy that hates everything we are? Jesus gives us the answer to these questions in our theme verse, John 16:33, “I have said these things to you, that in Me you may have peace. In the world you will have tribulation. But take heart; I have overcome the world.” He is a God who overcomes and who carries us through our challenges and difficulties.

We had a fruitful summer at Brigade Camp this year. We had some successes and some struggles but through the grace of God we have overcome. We were blessed to serve 395 Campers this year. God moved through another great Bible Exploration studies written again by Todd Sharkey. God also used our times of cabin devotions and some great challenges from campfire speakers each night. Over the course of the summer we had reports of 7 first time salvation decisions, 25 campers rededicating their lives to Christ, and 71 that asked for prayer. We know that numbers cannot adequately quantify what the Holy Spirit of God has done, but it gives us some insight and reminds us that God is at work. 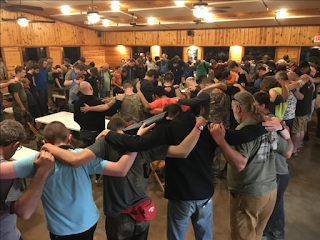 As many of you know some of our games can at times get a little rough. Boys will be boys, as the saying goes. During one of our game times one of our campers hit his head and suffered a concussion. As time went by it seemed that his injury was far more severe than we had thought. He was convulsing, somewhat delirious, panicked, and sick to his stomach. By the providence of the Lord our medical staff for that week was a practicing neurologist. We sent the young man to the hospital via an ambulance. By the time the ambulance left all of the campers had been gathered in the dining hall. As I entered the dining hall to send the campers towards the campfire, I saw an amazing site. The entire camp had circled up in prayer for this young man.

We continued on to the campfire and carried on with our program. At the end of our campfire session the injured camper’s brother, who happened to be one of our Junior Counselors came up to me. He informed us that his brother was there. I thought he was back with his parents to get his stuff and go home. In fact, he was at the campfire. The Lord had healed him completely. What an opportunity for our campers to see the true power of prayer and the great love of a mighty God.

During our first week of camp I wandered into the dining hall during some rare down time. Several of our service crew workers were taking a break. As we sat and talked one of the guys mentioned he played guitar. I asked him to grab his instrument and let me hear. He did and I was stunned. He turned out to be quite good. I got my guitar and we started playing some worship songs together. One of our staff members mentioned he played bass guitar. Before I knew it we had two guitars, a bass guitar, a drummer, and three singers. We were sitting around worshiping together for almost an hour. I asked the group to help me lead worship that night during campfire. That turned out to be one of the most amazing and impactful times of worship I have ever experienced. What started as just a fun jam session turned into a worship band that played at many of the campfires throughout the rest of the summer. It was amazing to experience the campers, leaders, and staff lifting their voices and hearts in worship to our amazing God.

What an immense privilege we have to serve our great Creator God in this ministry at a place like Stony Glen Camp. As well as the honor to work with a fantastic staff, counselors, volunteers, and junior counselors. This year’s class of junior counselors was one of the youngest we have had during my tenure. They all did a fantastic job serving as cabin counselors during our stockade weeks, as well as presenting skits and songs during our nightly campfires. One of the things that impressed me most about this particular group were the questions they asked during my daily bible study time with them. They asked some really deep and challenging questions about The Word of God and about the Christian life. Pray for these exceptional young men as they grow in stature and in the faith in the Lord over this next year.

As the Brigade Camp Director for nine years now, I am so grateful that the Lord has allowed me the opportunity to be involved in such a great ministry. A huge thanks goes out to all of the phenomenal Senor counselors that gave up a week or more of their lives to impact our campers with their passion for Christ. As a rare blessing, our entire central staff were seasoned veterans. I want to give each one of them public praise for how they gave of themselves this summer to help make this year a success. Perhaps you might want to ask the Lord how you might get involved in Brigade Camp 2020 summer camp season.