The Passing of Russell Parsons 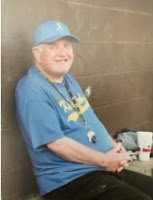 I'm sad to announce the passing of Russell Parsons. Russell went to be with our Lord and Savior on April 3rd, celebrating Easter 2021 in the presence of the perfect Lamb.

Russell was very involved in ministering through CSB Ministries in Ohio for many years. I first remember Russell helping his good friend Harold Callahan with Stockade in Warren, Ohio. Russell was also a cherished member of Ohio Brigade Camp staff. When I was a junior counselor, I remember him umpiring our camp baseball games, and also being the victim of the kissing bandit. Like many, I was known to him as "boy" - even after I became the director of CSB Ministries and Ohio Brigade Camp. I really got to know Russell well when I was the onsite summer camp director. When not cleaning bathrooms, Russell would spend plenty of time in our air conditioned office. And it was not long before his memory and brilliance became evident. Russell would regularly remind me of things I needed to take care of, so I began to refer to him as my executive secretary.

Russel used his memory to memorize many Bible verses and passages. He ministered at camp by doing the jobs others would not want to do. He ministered to boys by praying diligently and consistently for them and for Ohio Brigade Camp.

Russell did all of this despite living with cerebral palsy. Well done good and faithful servant!